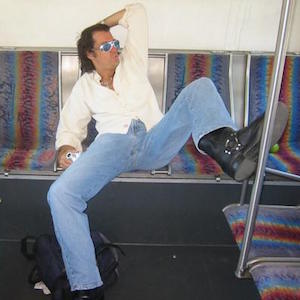 Me as Playboy, my pick up artist name. A little obnoxious?

Wanted to pass along today a story from my archive…

Just to show you what I used to be like, so you can appreciate how far I’ve come!

During the Project Hollywood experiment (almost four years ago – WOW), I was known as PlayboyLA, or just Playboy, which was the name Neil Strauss used for me in The Game.

I was part of a DYD (Double Your Dating – David DeAngelo) seminar in Sydney, Australia. This report takes place over a few days.

This is commonly called a pick up artist lay report, our crude vernacular for a report which ends with sex.

I hope you enjoy!

TD, Papa and I have been having a blast in Sydney. This place is absolutely loaded with gorgeous, fun women. I just came back from breakfast, for example, and saw 10 women worthy of approaching…similar to LA in sheer beauty quality, and less “bitch shields” too.

On workshop last weekend, we ended up late nite at a club called “Empire” in the King’s Cross section of town. I was working with three students, firing them into sets and winging them, or having them wing each other.

The sound volume in this club was tremendous, and forced everyone to work on their tonality…incidentally, tonality is one of the largest sp’s I see most guys having in this community – a powerful, resonant voice goes a long way.

I spotted a two set at the bar, and sent in a student. He was back in less than a minute, having been blown out. It was clear to me that this was an issue of tonality – as they barely even pivoted their shoulders from the bar to listen to him. I told him I would try again.

I went in with the Dental Floss opener (thanks Mystery), as I knew NO ONE on workshop was using that one. I approach, open, the girls turn, and….presto…a gorgeous HB10 Aussie, brunette, with a perfect smile…nice…I run a few routines, but find that later in the night when my game is very strong I rely on less routines, and more natural playful teasing which is more fun, and very present to the situation.

Also, as an instructor, I can have more confidence in this as I am improvising and allowing the students to lean on the canned material. Within 10 minutes she is leaning on me, and speaking in my ear. I use this opp to demo body language leaning etc to the students.

Without a good wing in this scenario, I am forced to play a different style game – one with takeaways. I have found this to be tricky here as the men in Australia are pretty bold, and WILL approach hotties in a club. Normally, after a takeaway, the girls are hit by other guys which forces you to either wait, or use AMOG tactics.

I eject the set, before the drag away friend can do so (leaving me in charge etc.) I explain the dynamic to the students. I explain that I will reenter the set shortly, after enough time passes to seem like we are simply enjoying the club, drinks, music etc.

After about 1/2 hour, I reenter with a student as a wing. He engages the other girl, while I game the 10. Again, my disinterested body language here is key. Also, I am looking away a lot…active disinterest in every way. She becomes more attracted.

I see her looking at her friend to be sure she is OK, and for that one moment when her friend is looking away. Every time her friend looks away from us, she leans in and begins to kiss me. I push her away slightly. She continues to persist. Make out ensues. I close, and bridge for the following evening. We chat some more. It was critical to speak to her AFTER the makeout, so that it wouldn’t fire her ASD in any way. Our final moment together was speaking & connecting with each other, not making-out.

Afterwards, I was out in front of the club debriefing with some students, when she passes with her friend to hail a cab.

We briefly speak, tease…it’s on.

The following day, we speak on the phone and make plans for Thursday night (this was Monday – she had just received her schedule for the week, and was not free that evening) she text messages me on Veroxii’s phone after work. I tell her to meet us at The Loft, on Darling Harbor – a very cool place.

I make it my goal to be in set when she enters, establishing social proof etc. We casually game a three set (two girls, one guy) and befriend them. She enters as they are exiting, and sees the interaction. When she sits down, she instantly begins to qualify herself…Veroxii sees this and ejects himself (he also has a real job and has to work the following day).

We venue change to Cargo bar, and isolate ourselves in a booth in the back. The sexual tension is very high, as she continues to qualify herself and seeks comfort with me – basic questions such as “So, where were you born in the States? You lived in New York? I love New York, it is my favorite city – which part are you from?” etc.

This dynamic was very clear to me – she would tell me these very adventurous stories to impress me, as well as ask me questions about my life at the same time. I dropped any “game” here, and just played with and amplified the tension (I guess this is the basic definition of the game, but no routines as she was doing most of the work for me – ideal). Continually throughout our convo, she would lean in and kiss me – it was important for me NOT to do so, as the tension would be broken…this was about me challenging her, not the other way around.

We went via taxi to a very romantic restaurant, and cuddled on the patio, talked, ate, and kissed for a couple of hours. These are the reasons I am in this game…complete privacy, absolute physical attraction, and total surrender from a gorgeous Aussie girl…nice…

It is clear that sex is inevitable, but the logistics were totally fucked. What is interesting about being with a “10” is that she clearly has other options, yes, but none as interesting as me – I threw her curveballs left and right, completely keeping her off balance to the point where she couldn’t help but seek validation from me over and over and over…no other guy would do that.

She is accustomed to a reverse dynamic, this is why gaming SHBs is somewhat easier than those 8s & 9s. I ejected the evening earlier than the fclose. I didn’t want a clumsy ending with screwy logistics – TD, Papa and I were staying with a friend, Dan and she was also staying with friends near Bondi Beach, and couldn’t host. We NEARLY fucked in the alleyway, but both agreed that would be a bit much…all good things to those who wait…

Last night: She text messages me again, wondering where I am. Since we are now in a hotel, the logistics are solved. I met her at this cool club, again in Kings Cross, called Hugo’s. She was late, and the club was closing. I took this as an opp to do a false takeaway – called her, left a vm which said that the club was closing, she was late, so I was leaving for the hotel (risky, but I trust my instincts at this point).

She immediately phoned me back, and “convinced” me to meet up at Bourbon, a bar around the corner. I walk there, and she arrives nearly 5 minutes later. She is dressed in a sleek, long brown dress with no undergarment lines – can you say fclose? Immediately, AMOGs are on her.

I have to blow out one dude who approaches her – fairly simple – logically engage him, completely dominate him tonality wise…his friend comes up, speaks with him briefly, I turn her to me, tell her a funny story – relocate her….hottie management – lotsa work. At one point, some girls approach me claiming I had asked them some question about dental floss a few weeks earlier – couldn’t be me, could it?

Literally, one blondie tried to blow me out with my girl by claiming I had used this pickup line on her (of course, they were right). I just blew it off, showed no interest, and made a little fun of the girl to get her to dismiss herself. I decided it was time to get out of here. “Let’s go back to the hotel, and see what’s in the fancy minibar of our suite”

On the way, the kino and kissing begin to escalate. I call ahead to see if TD and Papa are there – they are actually out on the town too. So, we take over the main bedroom. Gentle playing, teasing, massage, escalate – NO LMR had played tight/proper game to this point, so no resistance – she had already made her decision.

I will probably see her again (lol). Also, earlier in the day I had another very sexy Lebanese girl on the same bed and got MASSIVE lmr…she has a bf, and we had been together maybe 90 minutes total at this point. No fclose with her, yet…but it perfectly demos the difference between longer/tighter game results vs. too early escalation. I still think with proper LMR tactics I could’ve had her then too, but more to learn always.

I plan to do a full write up when I return on the top adventures here, new routines, funny lines etc. There have been many!

That’s it man hope you enjoyed that. A real blast from the past!

Note: want to learn more about my days as a PUA, “The Game” & the (now) infamous Project Hollywood? Click the link and see the video of my return to the ProHo mansion + more.